The Iriz, named after the circular structure in the eye, formerly known as the PCC (Proton Compact Car) and GSC (Global Small Car), is a B-segment five-door hatchback. The big body sits on a new platform and Hot Press Forming (HPF) tech is used for vital components of the body-in-white. More commonly used on European vehicles, HPF parts have three times the strength of mild steel and was first introduced in the Preve and Suprima S. This enhanced the safety, verified by the award of full five stars in the ASEAN NCAP crash test.

Proton Iriz was deeply loved by most of the young generation. Following on, The Proton Persona is launched in 2016. Based on the Iriz platform, the Persona shares the same HPF tech on car chassis manufacture guideline – wheelbase length as the hatchback, as well as its width and height. Obviously, the sedan body style sees an increase to the vehicle’s length, which measures 4387 mm, an increase of 467 mm from the Iriz.

How many bars available for Proton Iriz & Persona?

Proton Iriz and Proton Persona BH doesn’t come with the OEM front strut bar from the car manufacturer. For Proton Iriz and Proton Persona BH, Ultra Racing has developed a 2 points front strut bar, located at the top of the absorber (left and right) and hidden under the wiper panel in order not to affect the normal procedure of service and maintenance. 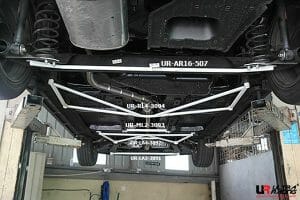 The OEM rear suspension setup of Proton Iriz and Proton Persona BH comes with torsion beam systems, without the OEM rear anti roll bar. Ultra Racing decided to develop a solid 16mm & 19mm OD (outside diameter) rear anti roll bar as it significantly improves the handling performance and maintains the comfortability of the car. For a keen driver, you may choose the rear anti roll bar in 16mm setup for your daily driving. If you’re a driver who enjoys the fun when cornering, a 19mm setup of rear anti roll bar is the choice you need the most.

A normal road is not flat as a race track, it is often uneven and bumpy. When the left and right suspension alignment are different such as during cornering, the stabilizer twists the bar and suppresses the roll by its restoring force. This will result in an understeer or oversteer and also there’s a risk to lose control if over body roll.

The reason why automakers install stabilizers with higher spring constants than usual on genuine sports type and high-grade cars is because they intend to suppress rolls and improve ride quality.  We’ve found out that there are 2 scenarios shown in the market, either the higher specification of car comes with OEM rear anti roll bar or the thickness of OEM rear anti roll bar will be depending on the specifications.

By installing the suitable size of anti roll bar, it is possible to suppress the roll of the vehicle’s body without stiffening the suspension and improving cornering and traction. In addition, since the left and right wobbling is suppressed and the posture is stable, there is no discomfort and the risk of motion sickness is reduced.

Stage 2, comprising Front Lower Bar, Rear Lower Bar and Rear Torsion Bar are able to reduce the car chassis flex and strengthen the main chassis platform. It is highly recommended for heavy load vehicles such as SUV or MPV as it helps to enhance the stiffness and handling during higher speed  and cornering. After a test-drive done by Ultra Racing customers’, they highly recommend installing stage 2 bars on their Proton for daily driving, as there’s a huge enhancement on driving performance.

So, there you go, the Ultra Racing for Proton Iriz and Proton Persona BH. What do you think? Come and experience it by yourself!

So, there you go, Ultra Racing’s bar for Perodua Ativa. What do you think? Come and experience it by yourself!